Over the week of 2nd-8th July, Wales for Peace have been participating in the Llangollen International Eisteddfod – with a small ‘pop-up exhibition’ complementing the work of the Llangollen Archives Committee to capture the ‘Peace Heritage’ of this incredible festival of peace and reconciliation, borne out of the ashes of World War 2, that is now celebrating its 71st year.

WCIA’s contribution to Llangollen’s exhibition has focused on exploring the heritage of the Llangollen Youth Peace and Goodwill message, working with the Archives Committee and local partners. We are tremendously honoured to have been invited to present Wales’ Peace Heritage story, as the ‘Day Presidents Address’ for the 4th July.

WCIA would like to express our sincere gratitude to our ‘Peace Associates’ Awel Irene and Sarah Baylis for leading our work with the Llangollen local partners, and to Eisteddfod Chair Terry Waite CBE for their support for this ongoing peace heritage work. 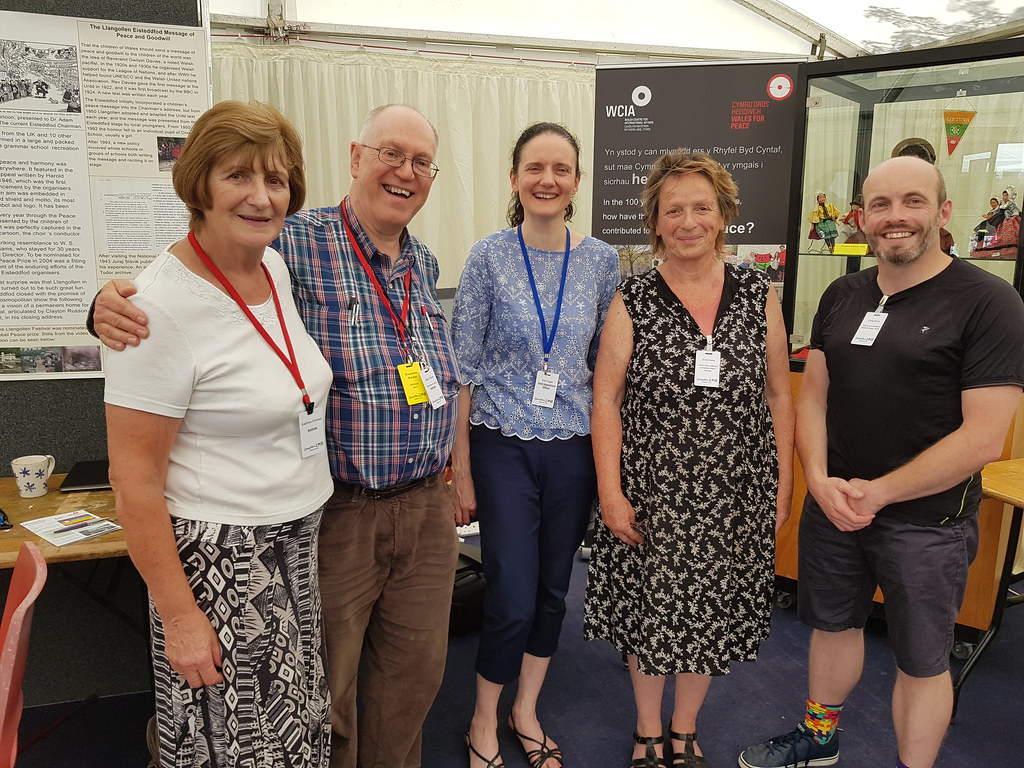 Wales for Peace Address to the Llangollen International Eisteddfod

by Craig Owen, Head of Wales for Peace, as Day President on Wednedsay 4th July

In 1922, the first Peace Message from the Children of Wales to the World,

contained a straightforward wish: a wish that there be

“NO NEED FOR ANY OF US, AS WE GROW OLDER

TO SHOW OUR PRIDE FOR THE COUNTRY WE WERE BORN

BY GOING OUT TO HATE AND TO KILL ONE ANOTHER.”

Today, conflict remains at the front of many of our minds

Not least those of our own children

As we mark the centenary of saying ‘NEVER AGAIN’ to war

We see a century of conflicts

The children of Wales have yet to see their wish fulfilled.

But the pursuit of Peace has been a vital part of Wales’ story,

Our nations story, our story

Over the last 4 years, the Wales for Peace project

Supported by the Heritage Lottery Fund

Has been working with many national and local partners,

Including the Archives Committee here in Llangollen

To explore this big question:

How, in the 100 years since World War One, has Wales contributed to the search for peace?

And not just a little bit daunting, compared to the stellar figures who have taken this stage before

Compared to whom I am a mere mortal

But my story in some ways is Wales’ story, and Llangollen’s story, and perhaps your story?

To build a better world.

Fleeing the fighting on the front

In the 1930s, Wales would go on to offer sanctuary to Basque children

In an incredible door to door campaign

Calling for America to join the League of Nations

And become a leader in world peace.

With 2,000 women flying the blue flag of peace

They marched to Caernarfon Castle

And then to Conwy, along the North Wales Coast

And all the way to Hyde Park

In 1926, the League of Nations held their International Peace Congress

The equivalent of the UN General Assembly today

In 1929, the Welsh Education Advisory Committee – the Teachers of Wales –

produced not only the first ‘Peace Education’ curriculum in the world

But also a manifesto for the 1929 General Election

Their ideas would go on to become enshrined

As the blueprint from which UNESCO was founded

In 1938, Wales’ Temple of Peace was opened in Cathays Park, Cardiff.

The first building in the UK dedicated to the cause of Peace.

In the memory of all those who had lost theirs in WW1.

In 1946, the children’s peace message received a heartrending reply – from the children of Germany.

“It is years since we heard from the Welsh children

HOW IT GREW DARK.

We should love to hear from you again.”

In June 1947, out of the horrors of WW2 nothing captured the spirit of ‘NEVER AGAIN’

Than the idea of a music festival, in a beautiful setting, with peace and reconciliation as its mission

52 choirs from across the UK, and 10 from other countries,

Packed out the local schools’ recreation ground, on which we now stand.

In 1949, the Children’s Peace Message to the world was broadcast from Llangollen

Llinos Roberts presented the first message, from this very stage

And from then till now, the two have been separate but complementary

For many years, it followed a formal format

Exactly as it should be!

In 1949, Llangollen also welcomed the Luebeck Choir, demonstrating peace and reconciliation in action

The first competitors from Germany

WW2 was still very raw; many in Llangollen and in Luebeck had lost relatives fighting each other

But on the Tuesday of Eisteddfod week, the town staged a special welcome concert

In 1953, the Obernkirchen Childrens Choir was described by Dylan Thomas, on his visit to Llangollen, as ‘the pigtailed angels’.

Their song, ‘the Happy Wanderer’, rocketed to the top of the charts

What a change in public outlook in less than a decade

From enemy foes to musical love

As cultures healed through music and exchange

The choir returned to Llangollen again in 1960

Through the 1940s and 50s, Welsh peace makers helped to found major organs of the United Nations

The World Meteorological Organisation…  Well, we in Wales normally have a lot of experience of rain.

In 1981, women from Newport, Cardiff and Swansea started a march to an air force base in Berkshire to protest against nuclear weapons.

They didn’t go home for 19 years, as the Greenham Common women’s peace camp grew to become one of the longest peace demonstrations in recent history.

In 1985 Dolen Cymru, the world’s first nation to nation twinning, linked Wales and Lesotho in Southern Africa, now in its 33rd year

In 1995, a Serbian Choir made it to Llangollen, having had to practice in cellars

A cry for peace on Europe’s own doorstep.

And Wales is very much part of the Eisteddfod’s international and heritage story.

Find out for yourself some of the fantastic stories

Of inspiring internationalists, ordinary people who did the extraordinary

As well as using the archives though

Could you volunteer your time or support?

Do we have any budding philanthropists in the room?

Could you give to help the Archives project to get under way,

and to access Heritage Lottery Funding to capture these stories for future generations?

In particular, towards marking the 75th Anniversary of Llangollen in 4 years time.

For World Peace Day this September, this petition will make its way by train

from towns across Wales, to London

You don’t have to be Mandela to change the world

We can all take actions for peace in our own ways

We are all peacemakers

We can all remember loss of war

We can all oppose conflict

We can all offer sanctuary to refugees

We can all champion equality

We can all build global solidarity

We can all inspire future generations

We can all work together.

We can all create peace in our time

in our world, and in our hearts and minds,

For WCIA and Llangollen,

Our shared desire is to inspire

A new generation of internationalists

Not to yearn with nostalgia, for a past now gone

But to learn with inspiration, and a questioning mind, for a present now here

And to burn with passion, for a world of peace and justice

And a future that is yours to shape.

Write it, create it, play it, sing it, take it, shape it, make it

Your are all the Peacemakers of Now

These are your communities

This is your international Eisteddfod

This is your Wales

This is your world.

This is your piece of peace.

You are the peacemakers of today and tomorrow

You can shape peace in our time.

One thought on “Llangollen International Eisteddfod: A Message of Peace Past, Present and Future”