Alaw Primary School in Tonypandy, Rhondda Cynon Taf, are a ‘peace school’ who know how to make history ‘cool’!

Alaw have been using the story behind the Welsh Women’s Peace Petition of 1923 to bring alive subjects across the primary curriculum, as they learned about ‘Annie’s Diary‘ – a journal kept by Annie Hughes-Griffiths, Chair of Wales’ League of Nations Union, recording her ‘peace tour’ of the United States in Spring 1924.

As well as uncovering hidden Histories of Welsh peacemakers, they mapped the journey through Geography, learning about the places, people and environments of Wales and America; used Mathematics skills to work out travel distances and timings (by 1920s transport of boats and steam trains); and Culture & Languages exploring similarities and differences between Welsh, English and American English, as well as native American cultures.

But for this workshop on November 12th, they invited Craig Owen, WCIA’s Heritage Advisor, to bring archives and objects from Wales’ Temple of Peace; and celebrated Welsh children’s author Welsh Meg Elis – who is the grand-daughter of Annie Hughes-Griffiths.

Meg wowed the children by bringing Annie’s suitcase from the trip to America, still emblazoned with her initials ‘A.J.H-G’ – a family heirloom found in the attic – and shared family memories of her grandmother, and father Thomas Elis. But the school were also fascinated to ask Meg about her own role as a peace campaigner, having been one of the many Welsh women who participated in the Greenham Common Women’s Peace Camp against nuclear weapons in the 1980s, with CND Cymru. 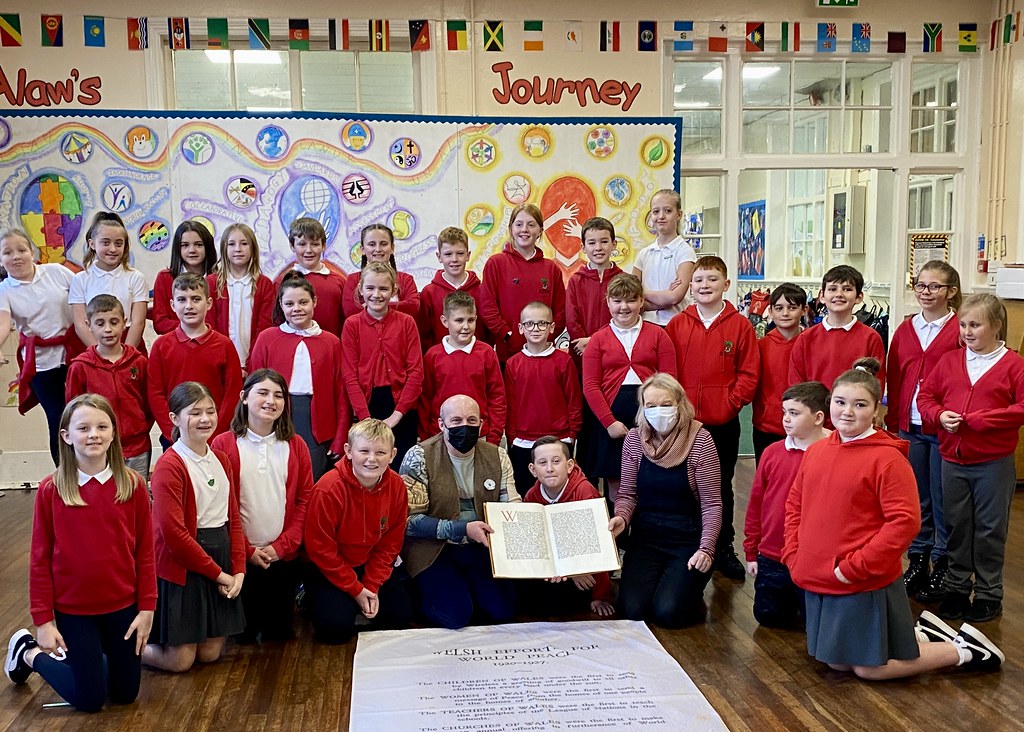 From the Temple of Peace Archives, Craig brought original documents and photos from the 1920s, and copies of pages of Annie’s Diary so that children could have a go at finding original historical material – just like real historians! They also enjoyed a huge banner of 1920s Peace campaigning achievements; and as an extra special surprise, in recognition of Alaw School’s work on the Peace Petition, they had the opportunity to view the original 1923 Memorial itself – a very special moment.

Through this project and other initiatives, Alaw Primary have been working to become a recognised ‘Peace School’ through WCIA’s Peace Schools Scheme. Today’s workshop is a shining example of children taking the lead in taking action for peace – leaving Craig and Meg hugely inspired by their work. Well done, a diolch!

The children are very keen to advocate for having a statue of Annie created, and for the next part of their ‘peace school’ project they want to learn about different types of memorials – statues, busts, sculptures, bronzes, carvings, blue plaques… – and about how they can lobby Members of Parliament and the Senedd, and official bodies, to see their ideas reach fruition. With the approaching Centenary of the Welsh Women’s Peace Petition in 2023-24 – for which WCIA are working with Academi Heddwch, Women’s Archive Wales, Heddwch Nain and others to mark the anniversary – maybe Alaw can lead the way?

Take a few minutes to enjoy Alaw’s starring role in this short film clip about the discovery of ‘Annie’s Diary’ in March 2020. We’re sure you’ll agree these children have all grown up a lot in 2 years!