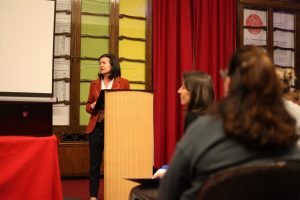 “You are all welcome,” said Eluned Morgan, Minister for International Relations and Welsh Language, at the Holocaust Memorial event, “Torn from Home” at the Temple of Peace Cardiff on 28 January 2019.
The event, organised by the Josef Herman Foundation and the Welsh Centre for International Affairs, reflected on the loss of a safe place due to persecution and genocide, and the need for a place of refuge.

Eluned Morgan added: “People generally want to stay at home. If they have fled from somewhere it will be a for a good reason.” To feel welcome everyone needs to be helped to integrate.
Celebrating the artist, Josef Herman is important because of both the welcome he found and the contribution he made in sharing Welsh life with the world though his art: “Only someone from the outside could help us to understand who we are”.

Josef Herman was born in 1911 into a Jewish family in Warsaw, where he attended the School of Art. However, after 1938, Josef was forced to abandon Poland to escape anti-Semitism. In 1942 Herman was working in Glasgow when he learned through the Red Cross that his entire family had perished in the Warsaw Ghetto. In 1944, while he was travelling in Wales, Herman’s art was influenced by a visit to Ystradgynlais, a South Wales mining town, which turned into an 11-year stay. In a short time, he turned to a familiar face in the community who gave him the affectionate nickname of “Joe Bach”. He found “home far from home”.

Since Herman’s time, Ystradgynlais has been a place of sanctuary. It was one of the first places to accept Syrian refugees. The evening saw the screening of three short films supported by the Josef Herman Foundation , to link the past and the present. The animations were made though a collaboration between local schools in Ystradgynlais, Syrian a refugee family, the actor, Michael Sheen, The Welfare, Ystradgynlais, Ffilm Cymru and the Cardiff based animation company Winding Snake. The audience also heard personal stories from refugees, who are now living in Wales.

Joseff, an asylum seeker and now Welsh speaker from Côte d’Ivoire, said: “Learning Welsh has been helpful to feel part of the community, to meet other people and, most importantly, to feel welcomed”. His entire speech was in Welsh, which earned him a huge round of applause. Joseff, who is in his 40s, encouraged other refugees look at Wales as a new home, a new start free from violence and persecution. Gareth Morgan, spoke enthusiastically about how a local Cardiff football team in Tongwynlais has found, not only success on the field, but also new, life-enhancing friendships since inviting a group of asylum seekers to join their team. Other asylum seekers and refugees also shared their stories of difficulties with the asylum system, of discrimination at times, but also of welcome as they settled in Wales. Finally, cellist, Rosie Biss, played a moving Bach solo as the audience reflected on the stories told and how Wales is working towards becoming a Nation of Sanctuary. 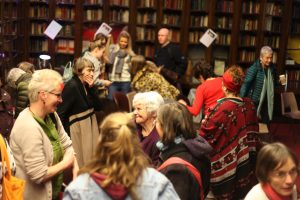 Members of the audience agreed that the short films presented should be played to the wider public, to encourage the knowledge about the asylum seekers’ situation and Josef Herman’s story.
Ffion, journalism student at the Cardiff University, said the event was very inspiring. “I learnt new perspectives and personal stories. Now I am wondering about what I can do in the future”.